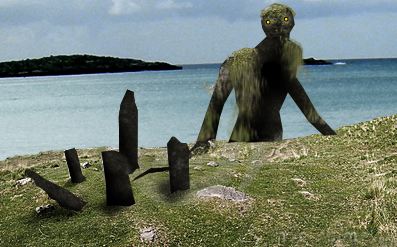 Danae scrambled ahead of me through the clawing brush ever higher up the Mount of the Colossi. I followed smiling despite myself.

“But I know where it goes!” she said for the hundredth time and brandished the massive faceted gem I’d found rolling in the surf. It flashed, filled with its own light, a strand of burning lightning frozen and captured in its amber heart. She grinned at me, that same grin that had captured my heart when we were just children.

“How could you possibly—?” She took off again and with a growl I followed. The hard white and gray soil beneath my feet shifted and crumbled making me stumble, but Danae ascended the steepening incline like a mountain goat. Of course she was just in her long tunic. I lugged my short sword, bow quiver and heavy cloak. I had to use the coarse creeping juniper and myrtle to haul myself higher up our childhood playground. We hadn’t been up here in ages. Not since our coming of age.

She disappeared from view, cresting the mountain’s chalky brow above me and for a moment I was alone suspended between the gray sky and grayer sea far below. I looked out towards Claw Hill a little ways away, the ring of stones on its peak stood dark against the pale earth. The wind gusted. The gulls screamed and far below the boom of the surf echoed up to me.

“Are you coming or not?” Danae said from above. Her face appeared above me.

“How is this harder to climb now than when we were kids?”

She disappeared with a giggle.

A moment later I scrambled atop the gently sloped peak of Mount Collosi. Here the myrtle was in bloom and the juniper berries ripening so that the mountain side was covered in flecks of blue. Danae ran ahead, a figure of white stark against the dark blanket of foliage. She dropped to her knees beside a tumbled hump of black stone and started pulling up weeds and breaking branches. When I finally caught up she’d cleared away the brambles from a flat gray stone I recalled as being much larger years ago.

“Remember?” She said and like a rush I suddenly did.

“The elf hole!” I said. I knelt as she easily flipped the stone away. It had taken both of us to move it when we’d placed it years ago. There beneath it lay a seven sided hole, its edges curiously sharp. It held stagnate rain water, shells, smooth stones and a faded bit of ribbon—the treasures of our youth. I grinned as she scooped the baubles out one after another. I picked up a triangular stone that had once been a fine knife for me to play with.

“I wonder how long we spent up here. Even in the rain,” I said testing the grip of my old toy. “There was that one time, we took that old canvas…”

Danae finished scooping out our treasures and before I could think to stop her, she thrust the great gem into the hole. It fit as perfectly as a blade to a scabbard, slotting home with a snick! The light within suddenly blazed ten thousand times brighter. The ground beneath us trembled and we scrambled back from our old treasure trove.

Everywhere golden light shot up from the cracks and crevices in the ground. The whole mountain shifted. We ran stumbling and falling. At first we made for the steep cliff we’d ascended but I snatched Danae’s hand.

“We’ll fall! This way!” I turned us towards Claw Hill. We’d made it only a little way down the ridge when the ground shifted beneath us again. Huge cracks split the earth. The seven standing stones toppled slowly towards each other and then impossibly the entire world seemed to heave up beneath us.

“Danae!” I screamed her name but sloughing dirt and tumbling stones separated us. For a moment there was only terror and madness as the earth itself rose up, trying to swallow me. I crawled and rolled, and tried to run. Branches and loose soil clawed at my feet. Huge rocks whizzed by and then all became still. Somewhere I could hear Danae screaming.

I looked up and my blood froze.

Out of the mountain rose a massive black figure, not unlike a man. Its limbs were long, spindly (if anything so massive can be called that), its head small and misshapen. Two tiny points of gold light blazed for its eyes. The black stone flesh was tattooed in swirling patterns and glyphs of golden light. A rumbling growl emanated from it as it slowly straightened to a massive height. It tugged its hand free from where its fingers hand once been the ring of stones atop Claw Hill. It dragged its legs from the earth and without a moment’s hesitation strode away, the massive foot swept over me, blotting out gray sky for a moment.

“Colossus,” I whispered the word. I started shouting as I rose on unsteady legs.“Danae! Danae!”

I found her a little while later, crushed. The stone must have landed on her and bounded away for her blood was splashed about in a wide spray of crimson around her pulped body. Her dark eyes were closed, her face twisted in agony, her mouth open showing broken teeth. I stared, suddenly empty. I knew I should be breaking, weeping, but instead there was only a cold void that filled me from top to bottom. For a moment a spark of wrath flashed within me. I still had my sword. I looked around and spotted my bow but my arrows were scattered and broken. Then I looked towards the Colossus and felt the ground tremble beneath its step.

I stood a long time until I could no longer feel the giant’s footsteps.

Then my knees surrendered. I fell and the tears came.