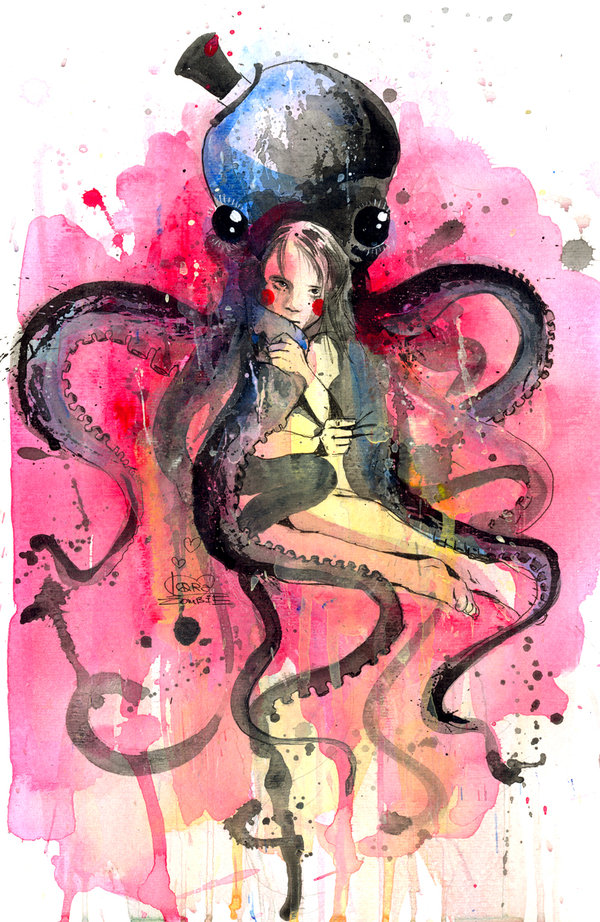 Inspired by the work Hugs created by Lora Zombie.

Image courtesy of LoraZombie.com (WARNING: Some images on Lora's site are not work safe or appropriate for all ages.)

We all knew she was there. The students. The teachers. The staff. The grown-ups pretended she wasn’t and ignored us when we mentioned her--acted like we hadn’t said anything at all. But she was real. For us, she was a legend, a boogieman to scare the youngest kids, but behind the jokes there was always the knowledge that she was really down there in the deepest darkest place beneath the school, where the limestone walls dripped and faintly, faintly you could hear the rumble of waves shattering on the cliffs. There, in the darkness, she waited for customers.


One time I mentioned her at home. My father went very still. He turned away from the sink full of soapy dishes and the look on his dark face made me feel the weight of that moment. I could see fear and something else I was too young to recognize in his eyes. The beating of my heart drowned out the rain drumming against the windows. Outside, the palm trees swayed and shivered in the storm.

“I won’t tell you not to go to her,” Father said. “That will only make you want to go more. Just remember, some times what you find is not always what you thought you were looking for.”

The longing to ask what he’d gone looking for and what he’d found instead, burned in my throat but from the way he turned back to the dishes I knew I would receive no answers.

I vowed to never go to the Octopus Girl.

My friend Jenny made no such vow. So that day Junior year when she met me by my locker, I knew I’d break my vow. I loved her with all fiery passion of a knight towards his queen--utterly devoted and forever separated. She was small, pale and doe-eyed, the epitome of a school-girl with long blonde hair that fell over the shoulders of her blue blazer. On her breast gleamed the school’s the gold octopus crest, ringed by the Latin words: Sapiens. Diligenter. Periculosa.

“Please, come with me. I’ll be too scared otherwise,” she said and I hesitated. Her warm hand closed over mine. “Pleeeeeeeease?”

I crumbled with the touch of that small hand.

We slipped out of our last period classes and met at the stairwell to the basement and wordlessly descended into the dankness of the utility and storage level of the school. We slipped past piles of old globes and stacks of unopened textbooks, computers the faculty either didn’t want to set up, or didn’t know how.

Part of me was hoping this was some wild fantasy where, really, Jenny just wanted to get me alone but she wove through the drifts of surplus and made directly for the stone stairway that descended deeper into the earth. The only sort of barrier the school administration had bothered with was a thin fluorescent orange cord that clipped to a pair of thick steel eyelets flanking the stair. Jenny unclipped one end and stepped aside.

I stopped at the head of the stair. A black void, like the throat of some unimaginably huge creature, yawned before me. I could hear the plink and swish of water below. My insides went cold.

“Geez, my hero,” Jenny teased and lead the way. The words were a lash of barbed wire across my heart. I followed.

The stairs were shorter than I thought they’d be. Only seven or eight steps ending in a broad landing that sloped slightly down into a pool of slick black water. A single old hurricane lamp sat at the edge of the water burning a steady green flame. The walls seemed partly manmade and partly natural, accented with weird chalky symbols that seeped and ran down the weeping stone. The air was still, and warm, and dank.

“Welcome seekers.” The voice was a soft echo in the still room. She sat up out of the water making hardly a ripple, a pale girl, waist deep in the black water. On her head, its tentacles draped around her like a slick, writhing gown, was a huge black octopus. Its tentacles slithered slowly up the landing, twisting, writhing, feeling everything. Its huge eyes, flanking the girl’s own, regarded us with glassy passivity. Most bizarre of all, the octopus had perched on its bulbous head, a tiny black top hat, which the occasional tentacle reached up to nervously adjust.

If possible, the girl was stranger even than her animal garment. Her face seemed young, maybe ten or twelve--my sister’s age—but I knew that couldn’t be right. Not if dad had come to see her. From what I could tell, she wore nothing but the octopus and a few tendrils of seaweed. She clutched the tentacles around her shoulders like a cloak. Red circles had been smeared on her cheeks as if she had heard of rouge but never actually seen it. She stared at us with amused, half-lidded eyes. My skin crawled not at the sight of the octopus she wore but what lay behind those dark, dark eyes.

“You’re looking for something taken from you,” the girl said. Her voice was so soft. It made you want to lean forward, to step into the water in order to hear it better.

Jenny spoke in a trembling voice, but I could hardly see or hear her. The Octopus Girl seemed to fill my perception completely, leaving no room for anything else. “Yes.”

Jenny held out the vile of blood--who knows where she’d got it. She gave a startled squeak as a tentacle reached out and deftly plucked it from her fingers. It vanished below the black water with a swish. The girl just stared, absently stroking a tentacle the way Jenny stroked her braided hair when she’d been surfing all day and lay dozy on the sand.

Finally the Octopus Girl spoke, “It lies in the bottom drawer of a dresser at 131 Zephyr Way. First bedroom at the top of the stairs.”

“Alani! That backstabbing witch,” Jenny snapped. She whirled to go, snatching my hand and pulling me but, the girl spoke again and I froze. “And what of you?”

“I--I'm not looking for anything.”

The Octopus Girl stood slowly, coming to the very edge of the water beside the hurricane lamp. The octopus’ tentacles writhed slowly around her thin white legs. Her half-open eyes locked with mine and I could see answers within them--answers to questions I didn’t yet know how to ask. My heart slammed against my breastbone, sending blood throbbing out into my fingertips. The dark, warm air clenched around me like a fist.

“He said he’s not looking for anything.”

“I’m really not,” I whispered.

Jenny pulled on my arm but my feet seemed fused to the floor. “We need to go.”

“We need to go,” I repeated, but I stayed. The Octopus Girl smiled faintly. I wanted her to look away from me, I knew that alone would free me to go sprinting up the stairs. But those eerie eyes stayed fixed on me.

“What you seek remains unfound. You can feel it. The absence of it. Don’t you...?”

“Yes,” I whispered. I took a step towards her.

“He doesn’t have payment!” Jenny blurted.

Like a rubber band snapping, the air around me relaxed. A pressure I hadn’t noticed building in my brain vanished and I could suddenly move again. “Yeah,” I stammered. “Yeah. I’m fresh out of blood.”

The girl smiled fully this time, showing small rounded teeth, like rows of white tombstones. “Then you shall have to return another time.”

And with that she slipped into the water. We bolted up the stone steps in a wild panic. At the top, Jenny hugged me fiercely. She was warm and soft and we were both bathed in sweat. Ten minutes before it would have been the highlight of my year, now though...

I looked back down  the black stair. Dimly, the boom of the surf buzzed in the air and I swear I heard a giggle and splash down below.