So lets try this again and maybe Blogger won't revert my post to a previous draft again.

Something truly random happened the other day and I wanted to share it somewhere. This seemed like a decent place since some of you will benefit from this randomness. Let's just say, keep an eye on my contests page and social media.

Let me start at the beginning.

Earlier in 2017 I came across a video featuring Nathan Fillion encouraging people to donate to the Sawla Children's Home via Prizeo. In exchange for your donation, you could win various little prizes and would be entered into a drawing for a lunch with Nathan out in LA. I saw he was giving away a signed Castle script at a certain donation level, and as I'm always on the look out for things to donate to Pikes Peak Writer's scholarship program auction, I figured this was win-win-win. The orphans got money. PPW got a script and I had an infinitesimal chance of meeting one of my favorite actors.

I donated enough to get the script and promptly forgot all about the lunch raffle.

Until the email arrived.

Honestly, I almost deleted it. Who doesn't get phishing emails claiming you've won some random thing or another? Not to mention there were no embedded logos or graphics, and the person writing asked for an insane amount of personal information. After doing some due diligence, I determined it was legit and sent in my information. I doubted I'd get more than 15 minutes with Nathan Fillion but figured, what the heck, free trip!

A few months later me and my smoking hot plus one (my wife) were on a plane for L.A.

The next morning I received a call. Number blocked. When I answered, the dulcet tones of (insert your favorite Nathan Fillion character here) greeted my ears.

"Yes. I hope you're ready for ... an adventure. Before we get started thought, I have to ask if you have any dietary restrictions."

"Excellent. We will be dining on a fresh poison oak salad."

"That should go down itchy."

"Yes. We will be by your hotel to pick you up in about thirty minutes. We'll be in a black SUV."

Right on time said SUV pulled into the portico and we met the man himself. He smelled like rainbows and children's laughter and if you listened closely, you could hear a chorus of angels singing from the silken threads of his perfect hair ... Just kidding. Really, he was dressed casually and seemed genuinely pleased to meet both me and my wife.

He introduced us to his manager Michelle and explained, "The theme of today's adventure is 'Destinations'. We're going to talk over our shoulders as if we're very busy and important and have no time to wait.  I figured we would start with the Chateau Marmont, a very famous, very infamous hotel. We'll have a little morning mimosa and maybe a ... surprise or two. Nothing too crazy."

My wife and I looked at each other in something of a daze. This was already so much more than we imagined. As we drove, Nathan asked about our lives and how I found out about the contest. He seemed pleased that I had been hoping for a signed script to give away and had instead won the whole kit-and-kaboodle.


Nathan led the way through the chateau's musty lobby to the garden restaurant. "I love it. It just smells like old Hollywood."

We ordered up tea and coffee and mimosas and talked about Nathan's upcoming show potentially titled the Rookie. Michelle asked what works of Nathan's made us fans. We listed off the big three (for us anyway) Firefly, Castle and Destiny.

Nathan laughed. "I play Destiny, but I recorded that stuff such a long time ago, I don't remember any of it. So I'll be playing and suddenly I'll hear myself say something and it will make me laugh. I'm really very entertaining."


Just then we were interrupted by someone saying, "Nathan! What are you doing here?"

We turned around and there stood Seamus Dever, grinning and holding a manila envelope. After introductions, he took a seat and said, "I just happened to be carrying these around. I guess you can have them." 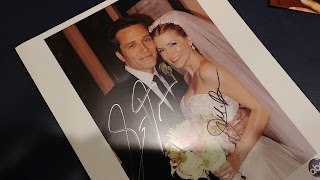 Inside was a set of Castle DVDs and a photo of him and his wife, when their characters got married on the show.

"I don't know why you'd want it, but there you go. It's a better picture than our actual wedding photos."

Both he and Nathan set to work signing the DVDs while we discussed Seamus's wife's travel blog, outdated technology and old video games which brought us back around to Destiny when we were interrupted again.

"Oh my gosh, what are you guys doing here?"

This time it was none other than Zachary Levi. He plunked down at the table and dove into the conversation, lamenting that he never got the year one Gjallarhorn. I was in nerd-vana (I know, it's a terrible pun), and had begun to grasp Nathan's reference to "surprise or two."

After a half-hour or so of fun conversation, we headed out, saying farewell to Seamus and Zachary, and making out way over to the Messhall Kitchen, for the next stage of our progressive lunch.

I asked Nathan when Marvel was going to see reason and give him a movie and he said he didn't know but would love any part. "What do you think I should play?"

"Cosmic Spiderman from the Spiderverse saga!"

(I'd like to amend that with: Richard Rider, the last Nova. I seriously can't picture a better actor to fill that role and it totally needs to become a movement @marvel #nathanfillion=richardrider. I would watch the hell out of that. To work, Interwebs!)

At the restaurant we ordered lunch and talked more about the business of Hollywood when once again we heard, "Nathan! What a surprise!" In walked Chris Hardwick and his wife Lydia Hearst followed shortly by none other than Alan Tudyk who started off the conversation with, "Well I got my first prostate exam the other day. That was weird." 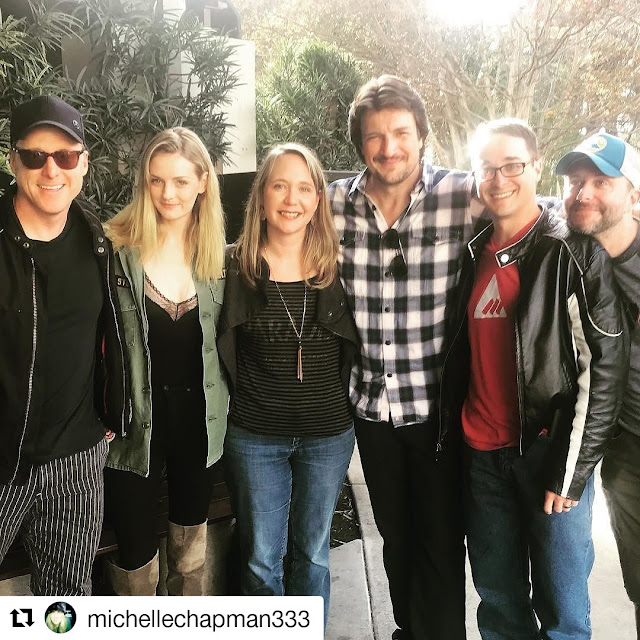 We laughed and fell into talking about parents and getting old. I got to pitch my idea for season three of Con Man to Alan. I don't want to give away anything but in addition to writing, directing, acting and producing the show, Alan would gradually replace all the other actors until it was like an Eddie Murphy movie. Alan looked like he wanted to die at the suggestion, but I have high hopes (not really, but it was a fun conversation anyway). We talked about Chris' new prehistoric bear skeleton that's mounted on a wood pedestal made by Nick Offerman's wood-working shop, Alan's broken phone and crazy stories about them meeting "really famous" people.  It all felt surprisingly normal.


We said goodbye to Chris, Lydia and Alan and made our way to our final destination, Aroma Coffee and Tea. As we pulled up Nathan said, "Shoot, Ricky is already here. I hope he hasn't been waiting."

Sure enough, it was Ricky Whittle and his girlfriend. We were warned, "Ricky likes to give amazing hugs." We made our way back to a beautiful table on the patio where we ordered more tea and a parcel of great desserts and started talking about good and bad cons, Star Wars burlesque (you heard me) and fun travel experiences. Carrie Fisher's dog apparently farted the entire flight to London once.

Not long after, we heard the now-familiar, "Nathan, what are you doing here!?" as we were joined by Michael Trucco, JR Bourne and Katee Sackhoff. They were all so nice. Michael and JR in particular were so kind as to ask about my kids, life in Colorado and my book. I wound up giving a copy to JR for his nieces who are working on their own novel (I also gave a copy to Nathan so I'm sure we'll be discussing film rights in no time ;).


This whole time, Nathan had been busy arranging tables and chairs, finding waiters, ordering food, requesting refills, making introductions, taking photos and videos so that my wife and I could "just enjoy the moment" and signing a bag of miscellaneous swag for us. (If you're reading this, Nathan, please remember to send the pics and videos along!)

The conversation turned to a funny story about a previous fan lunch Nathan did. Upon pulling up to a stop light along side a tour bus, he opened the window of their SUV and introduced Michael and JR. When JR introduced Nathan no one believed he was actually Nathan Fillion. Katee mentioned that she always hid from those buses.

Nathan said, "I always wave. I feel like it's part of my job."


We talked for over an hour after which Ricky gave me one of his patented "Whittle hugs" that lasted a humorously long time, and "snogged" my wife! Nathan packed us into the SUV with a final "Thank you again for donating to the Sawla House" and sent me and my dazed wife back to our hotel. Our "lunch" had spanned three restaurants and five hours. We'd met ten celebrities, eaten so much wonderful food we felt like never eating again, and had been given a whole bag of fun stuff, including another signed script Nathan wanted me to donate to PPW on his behalf.

I have to take a moment to thank Prizeo, Nathan Fillion and Michelle Chapman for organizing such an amazing treat for my wife and I, when they just as easily could have given us the fifteen minutes I'd expected. It's a rare thing for anyone to go above and beyond, much less someone who has absolutely nothing at all to gain from doing so. Thank you. Thanks too to all the other celebs who gave up part of their Saturday to come and hang out. You made our day!

If you enjoy Nathan Fillion's work or my writing, you might enjoy my award-winning novel Terra Soul or some of my fiction blog posts. Here are some favorites:

TIME STREAM
GIRL IN THE GLASS
OCTOPUS GIRL
Posted by S.J. Abraham at 8:16 AM 8 comments: