In honor of this week's theme (Detective) I'm going to be raffling off a Nathan Fillion Castle prize pack. Enter by signing up for my mailing list using the contact field to the right. Already on my list? Share the social media post for this story and you're in. Use a valid email because that's how I'll be getting hold of the winner.

You ever have one of those days where you’re working what should be a simple missing persons case and instead you wind up stabbed in the middle of the forest surrounded by statues and your steakout snack scattered all over?

Well crap. I guess it’s just me. I suppose it comes with the territory. I’m a detective. 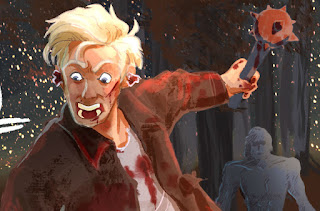 I lay bleeding and staring up at the silhouetted branches and statuary that hung dark against the sparkling night sky. I shook my head and tried to roll over.

I knew this case was going to be trouble when she walked in, dark hair down to her waist, pale skin, eyes like sapphires and a missing persons case. Missing husband. Very concerned. Rash of strange disappearances. Blah blah blah. I’d read the script before but I just couldn’t bring myself to turn it down.

Call me a sucker. Better yet, call me an ambulance.

For those not familiar with my line of work a missing persons case is never actually a missing person. Oh no! It’s never as simple as an unfaithful husband who’s run off with the barmaid. It’s never a kid who just got lost in the woods or a business partner who ran off with the money. Sure, it always starts that way but that’s never how it ends. No, it’s always got to be some epic scale fiasco involving a lot of blood on my face. Some of it my own. Or in this case, a lot of it.

Truth be told, it’s actually best that most of my cases end with a grand melee. Honestly, I’m not that good of a detective. I just kinda stumble from clue to clue until someone attacks me. Much like tonight.

“Must be getting close to the end,” I groaned. I dug my the flask out of my pocket. I always kept a little something-something in reserve for occasions such as this. A few swigs and I’d be on my feet again. I took a long pull that ended before I would have liked. Still, it revived me enough to get on my feet and recover the mace I’d planted in the face of the fella who’d stabbed me (with a pitchfork no less! Yeah. Not living that down anytime soon). I pulled a handful of my crunchy corn steakout snack out of my coat pocket, and popped a few kernels into my mouth.

“Alright,” I said chewing slowly. I leaned against a statue of a startled looking elf. “Now who exactly are you?”

I bent down to examine the body. I recognized the clothes and the parts of the face that were still intact. Farmer Giles. The old coot who had been in and out at my office going on about some rooster keeping him up. Why would he attack me? Why try to lure me out into the woods. Unless ….

I straightened, turning to the extremely life-like statue I leaned against. A startled elf, hands fumbling with his slender bow, a curious expression on his face. I turned towards another statue, a surprised looking dwarf, war hammer in hand, eyes wide, beard bristling. Behind him was a beef cake in furry underwear, each rippling muscle of his torso and limbs perfectly defined. The hairs on my arms stood to rigid attention. These weren’t statues. They were other adventurers! Adventurers turned to stone. Top notch detecting if I do say so myself.

“A medusa? Did the old coot summon a medusa?” I said to the closest statue. It didn’t answer. Behind me I heard something moving slowly through the brush. I strained, listening. I didn’t dare look, not with the chance a medusa was around. Then I heard the soft Cluck. Cluck. Cluck.

“A chicken? Why would a chicken …?” I looked at the face of the elf recognizing the expression: a mirror of my own bemusement. It wasn’t the terror a medusa would induce. It was the pure befuddlement of hearing that soft clucking. It was the look of a person about to say, “What the heck? Is that a chicken?”

Suddenly everything made a sort of sense. The missing persons case. The rash of disappearances. The statues. The old man complaining about a rooster. There was one answer. One thing that made a lick of sense. Cockatrice. That blasted magic chicken whose crow could turn just about anything to stone.

“Time to go.” I glanced around. The thing had to be close if I could hear it walking. I tore bits of cloth from my ripped and bloodstained tunic, jamming it deep into my ears to muffle it’s crow. I eased my way towards town, past more statues. A deer. A racoon. A barmaid. Each perfectly rendered, each with the same stupid look on their face. The sky was lightening. Any second now the thing would crow and I was fairly certain that despite my makeshift-earplugs I’d be stone.

“Ok, why …” I whispered to myself. “Why turn people to stone? I mean, obviously to get them out of the way but it’s a really random way to kill people.”

A flurry of iridescent blue and green slashed through the air and suddenly the cockatrice stood in front of me, three feet of mean enchanted rooster with a high arching tail and wicked golden spurs. It jerked it’s head to the side to regard me with one black eye. Sure it was barely half my size but it still scared the dickens out of me.

“Nice chicken. Nice quiet cockatrice,” I said. My hands crept over my coat searching for something, anything that might give me a chance. I still had my mace, but the thing was too far away. It would crow before I could close the distance and maces aren’t known for their thrown accuracy. My hand closed on the fistful of loose crunchy corn snack still rattling around in my pocket.

Maybe. Just maybe, I did have a chance.