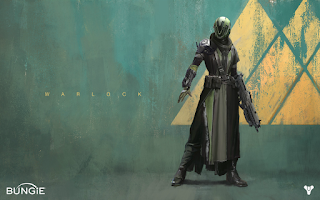 Based in part on the supremely cool video game Destiny, where I can be found far too often. Image courtesy of Bungie.

"Master Sola has sent me for your robes," the boy says. His hand rests on the hilt of the knife hanging on his belt. I can see a wiry, toughness in him and a stubborn ignorance. He's one that left the school to join the fighters.

"And what, pray tell, would the Hunter Vanguard want with my robes?" I say.

"Sorry," the boy says and scratches at his nose, looking down at his feet. "Not just yours, all the Scholars. All the robes. The hunters need cloaks."

"Of all the..." I slap the door controls, closing it in his face with a whine of hydraulics. I fume for a moment. Sola has become insufferable. Her familiarity. Her pranks. They're insulting. They demean the labor of what I and so many others toil over day in and day out. I close my eyes against the anger boiling in my skull. I breathe in. I breathe out. Calm. Peace. I must be able to focus.

My mind stills. I turn back to the journals heaped like a dragon's hoard on my desk but before I can take a seat there's a sharp rap on my door.

"Toland says you won't give up the robes."

"I'm not just going to go away," Sola calls through the door. "Come on. Open up."

When I finally yield and open the door she's standing, arms crossed, a wisp of a woman, her nut brown hair going prematurely gray. Her thin face is weathered, weary and surprisingly lacking the fury I expect. She's wearing a long cloak of autumn hues. The wire-wrapped hilts of a pair of knives protrude from the tops of her tall boots. A long barreled rifle is slung across her back and a pistol the length of her thigh is strapped to her leg. She must be about to go on patrol.

"Come with me, please," she says. It's phrased like a request but I feel the command in it. I loath myself as silently I follow her through the city to the hanger and into a waiting atmospheric jump jet. We leave the city behind, cruising out over the rotting remains of what once was our world's golden legacy. She has nothing to say until we're airborne.

"You see that down there," she says. "That's enemy territory. Fallen. Hive. They rule that. They are literally knocking on our doors and do you know who goes out there, to push them back from the doors?"

I stare moodily at the broken buildings, the heaps of rusting cars and ancient peeling signs promising a better life on new worlds. I know who goes out. She knows I know. I've argued with her enough times about the risks she takes.

"You're not the only ones trying to make a difference," I say. "We're working on--"

I ball my hands into white-knuckled fists. This would be so much easier if she weren't being so blasted calm. We're circling a shattered skyscraper, now draped with dead vines and dusted with snow. I stare down at the gaping windows. I know she's right. It stings. The Hunters are useful. The Scholars... We're a drain of precious resources. "We're so close to tapping the Traveler's power. It has so much potential and it's right there! But we just... There's something between us and all that potential."

"You're the smartest person I know," Sola says, her voice soft, reminding me of those quiet stolen afternoons lying on Black and White Hill gazing up at the cracked belly of the Traveler, just being together. "You'll figure it out."

"Don't patronize me. Scholars have been studying this for almost two centuries now!" If I focus I can feel the power even now, hot as a star's burning core. All that separates me from it is a thin but impenetrable veil. I'm lost in thought, hardly registering the tiny things moving below. I sigh. "I'll see that the robes are delivered."

Alarms scream. A plume of fire jets up from one of the windows. Sola heaves on the controls. Our starboard engine explodes and then we're spinning. Blue energy spatters against the windows, shattering the canopy. Fallen plasma blasts. We hit the building. Steel screams. Glass explodes. The straps I'm wearing slam taught and then there's bright, blinding, breath-stealing pain.

And I know I'm dying.

I'm skewered on a piece of jagged metal, my blood splashing out in bright gushes over my black robes. Those stupid robes. I can't breathe. I can't scream, though I desperately want to. Sola's moving. She climbs across my vision, says something that I can no longer hear. Her hand touches my face, pulls my eyes up to her soot smeared face.

"Stay with me." The words come from a hundred million kilometers away.

I can't. My body is gone. Only pain remains. There's distant thunder, but it sounds wrong. Too flat. Too sharp. Gunfire, I realize. Sola's fighting back. Gradually, even that fades, leaving only darkness and the scorching presence of the Traveler's power.

The veil separating me from the power stretches, thins and then melts away. For a moment, an eternity, there is stillness. I die.

Then a universe of potential, of knowledge and strength and energy explodes within me. I suddenly feel absurd. It was all there all the time, all the answers, all we needed to access the power was right there, waiting to be tapped! Not just for me but all the guardians, all of Earth's children. I grasp it. I pull it into me.

I'm laughing as I reconstruct my body, as I force my heart to beat, my synapses to fire, my lungs to breathe. I leap off the impaling metal. I'm filled with and surrounded in flames. My flesh knits instantly and the world snaps into focus. Fallen charge through the wreck that once was some sprawling office complex. Sola lies on the ground bleeding from a dozen minor wounds, her rifle smoking. Her glowing blue eyes meet mine, wide with awe. "You're alive? How are you alive?"

Streamers of blue plasma streak past as the Fallen snipers open fire. With weak, bloody hands she holds out the rifle. I walk past. I need no such weapon. Not anymore. I leap. I pull the Traveler's blazing energy through the veil and into the air. I hurl it and it strikes with the force of a bomb. The Fallen are sent flying, their very molecules breaking apart from the force of my strike.

The power bleeds away, sliding back beyond the veil. I breathe in. I breathe out. Calm. Focus.

"No, it's just me," I say, holding out my hand. She stares and then slowly smiles as I pull her to her feet.

Liked this story? Check out my other Destiny themed fiction

LAST GUARDIAN STANDING
WHAT AM I
~SJA
Posted by S.J. Abraham at 12:18 PM 5 comments: