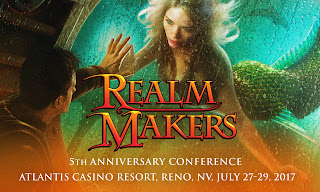 A few months ago, my friend Tammie suggested I submit Terra Soul for the Realm Makers' Debut Novel of the Year contest. I submitted without much thought of winning and promptly forgot all about it. So it was something of a surprise when I received the following email Sunday afternoon:

You are one of the Debut category finalists in the Realm Awards.

CONGRATULATIONS! Our judges think you're remarkable!

I'm letting you know ahead of time (because I wanted to be the one to tell you!), but PLEASE don't announce this to anyone just yet. I've written the blogpost and am sending it out right now. As soon as it's live, you can spread the news.

Again, congratulations. I'm celebrating with you. It was SO much fun to watch the results roll in.

You did well. Be proud.

Needless to say, I sat flummoxed in my daughters' room where we'd been playing. Then came the realization that industry professionals had read my novel, and not only liked it, but deemed it worthy of being one of three finalists. I am deeply humbled and wildly excited at the prospect of winning novel of the year. I may have to forgo my usual Pikes Peak Writer's con this year in order to attend the Realm Maker's conference, just in case.

Please, check out Bethany's blog post, when you get a chance, and wish me luck!

This piece is based on my favorite video game, Destiny, published by Bungie. Image courtesy of Bungie. 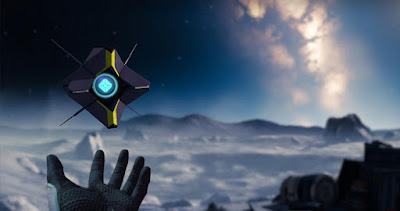 I used to know who I was. What I was. I had a whole bit about it.

Of course, I wasn't really contemplating that as the hail of enemy fire spattered off the walls and pillars of chitin we dodged around. Pale glowing moths and clinging tendrils of swirling darkness tried to take my attention from the path ahead and the beams of supercharged plasma slashing through the air around us. Typho ran, heedless of where we went so long as it was away from the pool and darkness and thing that had killed Uni. Behind us Arcellen also ran, his breathing ragged in our coms. Typho fired his jump jets to clear a chasm that yawned suddenly beneath us, and behind us I heard Arcellen swear. Then I heard him hit the edge of the pit, heard his hands scrape frantically against the ground, and then slide away.

"Guardian down!" I warned. "You're the last guardian standing."

"Did his ghost get him?" Typho roared ducking behind a pillar.

"Did it get him?" Typho shouted again. A barrage of purple plasma spattered around us scorching his shields and sending us scuttling father back behind the pillar. The thing that had killed Uni, that mass of claws and tentacles and bulbous flesh, was still closing in, herding us somewhere.

I checked my sensor readings and pushed my signals out to maximum range. "I think so. I have a weak signal but it's below us. Quite a ways."

"We're going after him," Typho said. "Get me the Blacksmith."

"It will take a moment to retrieve it. You good?"

I switched my signal outward, up through the hull of the Hive dreadnought, and out into orbit where our ship waited. The system interface came up and I punched up the inventory. The thing's blasts ripped the air again, the energy pulsed from its eyeless head in a grinding staccato rhythm. Typho hurled a smoke grenade and lunged out from behind the pillar, letting the cloud of poisonous gasses he'd created cover his move for an alcove on the far side of the passage. He rolled and sprang to his feet. The scorching plasma hesitated for an instant, just long enough for him to scramble into the niche in the wall. Too soon it was splashing against the pillar, weakening his shields.

"Can't stay here," Typho grunted, and darted back into the open.

"It's on it's way," I said activating the transmat. The massive sniper rifle with it's armor piercing rounds was on it's way, but the ships inventory was being sluggish. Too much interference from the Dreadnought's chitinous hull. "It might take a few seconds to arrive."

He sprinted towards the thing, rolled again, jumped, and then lunged for the pit that had snatched Arcellen away. The stream of purple plasma came roaring out of the thing's head again and gouged into Typho's shields as he hung exposed in mid air. For a moment the amazing Golden Age armor held against the onslaught, but then it shattered. Plasma tore into Typho's body, scorched flesh from bone and sent his physical form careening off the wall.

I lunged after his light, throwing my capture field to maximum. The field snapped closed and I jerked to a stop.  Within my field hung a tiny, but brilliant spark of light. Typho's light, the life given him by the Traveler. His essence. His soul. I'd saved it and with enough time I could revive him.

I took a quick assessment of our situation. I'd landed us a few feet below the lip of the pit, on a small stone outcropping. Arcellen's ghost, hopefully still holding it's guardian's light was approximately sixty meters below. Where exactly, I couldn't see, not while holding fast to Typho's light.

Energy blasts scorched around me. The thing was still out there, still trying to get an angle on us. My shield sparked with each stray hit and I pushed my them to maximum. If I could hold out long enough for Arcellen's ghost to ...

I am very hard to distract. I'm not being conceited or anything. It's true. I have one job: aid my guardian. And at that moment Typho needed my help the most, but just then something broke through my protocols and tore my attention away from my task.

Beside us on the stony ledge lay a ghost. A dead ghost. But not just dead, it was encased in crystal that had grown out of the wall. It had to have been there hundreds of years. Maybe longer.

"But ... we're the first guardians to ever set foot on the Dreadnought."

I had thought all ghosts born with the Traveler's dying breath, but this ... this meant that there were others before, long before. Was there another Traveler? Did the Traveler die before? If so why and how? And most importantly, why didn't I know anything about it?

More shots gouged into the rock around me. My shield output dropped another seven percent. I should have been worried for Typho. I should have been focused on putting his body back together. But all I could think, all my phenomenal processing power could focus on, was a single thought. "What am I?"


Liked this story? Check out my other Destiny themed fiction: